Dolmabahce Palace in Istanbul is a former residence of six Ottoman Sultans and served as administrative center of the Ottoman Empire.  Turkish founder Kemal Ataturk spent his last days in this palace.  Built on artificially filled land, this Baroque style construction is a largest well preserved Palace in Turkey.

Today the Palace is a museum.

Price: 40 Turkish Liras.  Only guided tours are allowed to preserve the palace.  Tickets sold per day are limited.  Box office may close earlier than usual during high seasons .

31st Ottoman Sultan Abdulmecid I ordered to have a new Palace built in Istanbul to move his administration from the Topkapi Palace.  The territory he selected was a bay for Ottoman fleet.  To create land, the water was filled with sand and stone.  “Filled-in” became the name of the Palace which translates to Dolmabahce in Turkish.

The construction began in 1843.  It cost the Empire an equivalent of 35 tonnes of gold.  Armenian family of architects, the Balyan, started to work on the project.

The design of the Palace in Istanbul was a dispute among architects.  As a result, a mix of Baroque, Rococo and Neoclassical styles was used.

Abdulmecid I was famous for modernization of the Ottoman Empire.  Dolmabahce Palace shows clear influence of European styles and motives on the exterior.  The inside, however, is strict to Ottoman tradition and lifestyle.  The Palace was divided into two wings, one of them was used exclusively by men, the other - by Sultan and his family.

A separate building was used as harem.  Traditionally harem, the residence of Sultan’s women, was a stand alone area.  This tradition was kept during the design of the Palace. 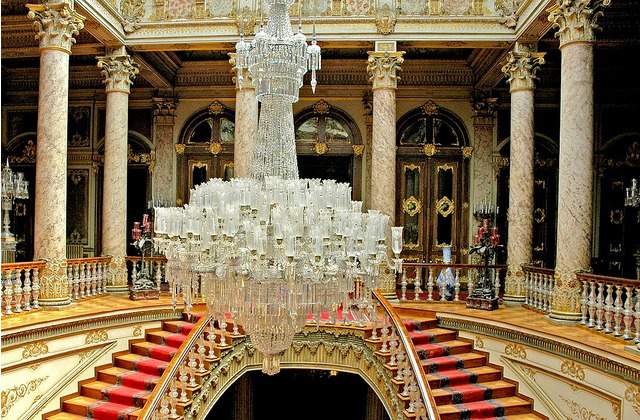 Dolmabahce in Istanbul was the most expensive project which brought Ottoman Empire to bankruptcy.  The rich decoration was made of gold, crystal, exclusive marble and other luxury stones.  Ceiling alone took 14 tons of gold to complete the decor.

Breathtaking 4.5 ton chandelier meets you as you climb a crystal staircase.  This is the world’s most impressive staircase and the largest Bohemian crystal chandelier with 750 lamps.

The floor of the Palace is covered with a number of special carpets made of silk, cotton, wool and gold and silver threads.  The carpets are called Hereke carpets after a factory which made them.  Sultan Abdulmecid founded the factory in 1841.

Walls of the Palace are decorated with over 200 oil paintings by famous artists.  Russian romantic painter Aivazovsky is among them. 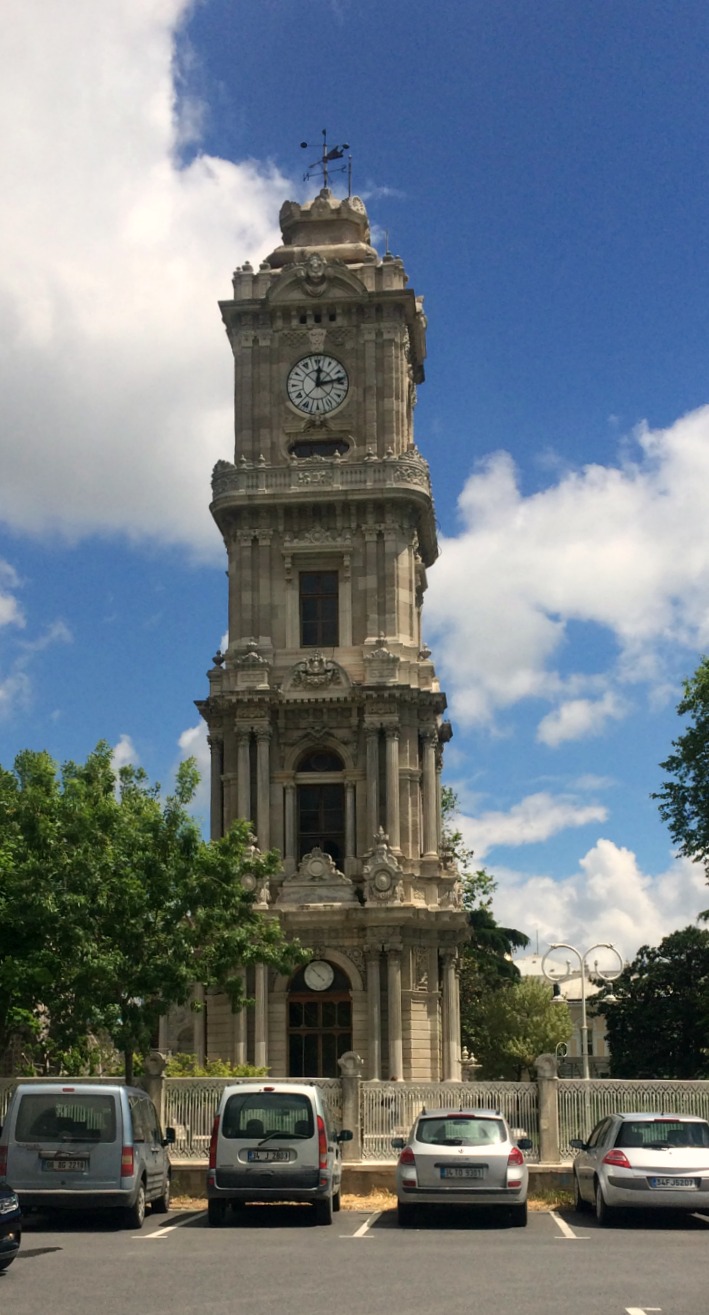 Dolmabahce Clock Tower in Istanbul was built during the rule of Ottoman Sultan Abdulhamid II.  The construction took five years to complete.  Armenian architect Sarkis Balyan designed the tower.  French clockmaker company Jean-Paul Garnier manufactered the clock and used popular at the time Eastern-Arabic numerals on the face of the clock. The building began in 1890.  The tower was made in the same style as the Dolmabace Palace - neo-baroque style, and placed near the entrance to the Palace's Treasury.  James Bond 1963 movie From Russia with Love shot several scenes (later cut from the final version) around the palace.  Cast toured the area and took memorable pictures.  Daniela Bianchi has a shot in front of the Clock Tower in Istanbul.

Gifts to Dolmabahce Palace in Istanbul

The word about the construction of such a grandiose Palace in Istanbul was spread around the world.  Some called the Sultan “sick man of Europe” for all the expenses, some sent him gifts.

World technologies were brought to the Palace to give it a modern spin. Water closets and gas lightning were brought from Great Britain.  Later electricity, central heating system and elevator were added to the facilities.