Be a guest of Istanbul Synagogue.  Locate 16 active out of 23 synagogues of the city.

Turkey as a Muslim country has the largest Jewish population of about 18,000 people in the country.

Most Turkish Jews live in Istanbul.

Istanbul's Balat district is the historical quarter in Istanbul with first Jewish settlers.  The area today is a colorful neighborhood with old houses, places of worship and eateries.

Istanbul is home to about 15,000 Jewish people today and 16 synagogues to worship and celebrate cultural events.

(!) Bring your passport to visit a synagogue. 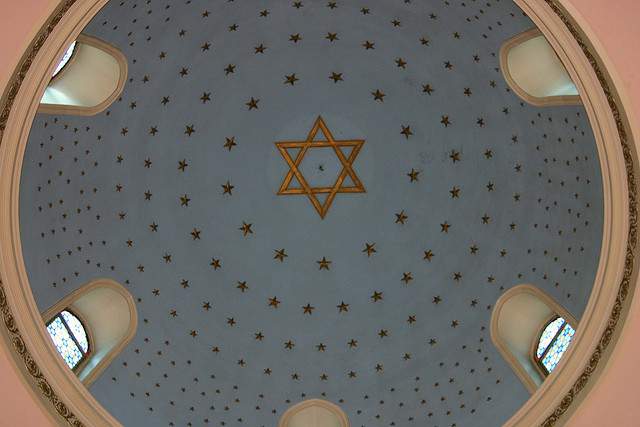 The infrastructure for Jews living in Istanbul has the following establishments:

To get a picture of what life of Jews was like in 1950s in Istanbul read this story of Nino Mizrahi describing her childhood years in Galata area in Istanbul.

Location: Inside the Neveshalom Synagogue.

Before Jewish Museum was re-organized into a museum it was an Istanbul synagogue.  First traces of a synagogue on this place were found in as early as 1671.  It was a Kal Kados Galata Synagogue.  Later the building was re-named into Zulfaris Synagogue after the street it was on.  Zulfaris means “bride’s long lock of hair”.

In 1983 Zulfaris Synagogue held the last wedding ceremony as a synagogue. By this time there were very few Jews left in the area due to persecution.

In 1992 the synagogue was turned into a museum to commemorate 500th anniversary of expulsion of Jews from Spain.  The museum opened its doors to visitors only in September 2001.

Check out a list of larger and more known Istanbul synagogues below. It is said there are about 30 synagogues in Istanbul.  Some of them are very small and well-hidden from foreign eye.  Only locals have access to certain synagogues.

Neve Shalom Synagogue is the largest synagogue in Istanbul.  It is considered the most beautiful one the middle east.  Built to meet the religious and cultural needs the synagogue was named Neve Shalom, meaning “Oasis of Peace”.

In 1935 Jewish population in Galata area reached its peak.  A need for a new worship place was clear.  As a start, reception hall of the Jewish Primary School was re-arranged into a prayer room.  School’s wardrobe served as Ehal (place for Tora - the whole of Jewish law).  Chairs for the visitors were rented from a near-by cafe.

In 1948 the Community Board of Directors decided to built a proper synagogue.  In 1949 two young architects were assigned to the project. New graduates from Istanbul Technical University Elio Ventura and Bernar Motola started to work on the construction.

Students of Academy of Arts designed window glass.  The glass was especially imported from England to satisfy the design.  The chandelier placed in the Neve Shalom synagogue weighed 8 tons.  Architects struggled with the design of the synagogue’s dome because it had to carry such a heavy chandelier.  The dome has been a success.  Truly a masterpiece.

Unfortunately this Istanbul synagogue suffered several terrorist attacks - one in 1986, another attack in 2003.  Both attacks were carried out during a Shabat service.  Many people died.

Ahrida synagogue is one of the largest synagogues in Istanbul.  It is was originally founded in the 15th century under the Ottoman reign on the territory which is now Macedonia.  Due to extensive damage caused by the fire in 1600s, it was decided to rebuild the Ahrida synagoguge in Istanbul in Balat district where majority of Jewish population lived.  In 1694 the new Ahrida synagogue in Istanbul opened its doors.

The name of the synagogue comes from the place Ohrid where it was first built.  Because the initiators of the establishment were Greek Jews, the Greek pronunciation "Ahrid" was chosen for the synagogue.

Italian synagogue is also known as “Kal de los Frankos”. In 1862 Spanish king commissioned the synagogue.  In 1931 the original building was torn down.  New synagogue sponsored by Italian-Jewish Community was built.  Gothic style of the construction and marble steps make this Istanbul synagogue an impressive piece of art.

Ashkenazi synagogue is largest of the three Ashkenazi synagogues that once were present in Galata area.  This Istanbul synagogue is the only one standing today.  It was built in 1900 by Jews from Austria. First Jewish immigrants from Germany came to Istanbul in 14th century.  You can still see signs in German inside the synagogue.

The building was made in European style.  The chandelier was a special order from Vienna.  Wide dome decorates the construction and is painted in sparkling color.  Stars on the dome add to the beauty of the decorative idea. There are two azaras, the balconies for women, which were made in the most delicate style.

Admire the ebony wood arches which remind the horseshoe, the motive of Islam art.

Yanbol synagogue is also known as the Bulgarian synagogue due to the name of a town in Bulgaria the synagogue is named after.  Yanbol (or Yambol, Jambol) is a town in Bulgaria neighboring Edirne area in Turkey.  In 1364 Ottomans conquered Yanbol and the town had a large Muslim community.   It is said Separdi Jews who lived in Yanbol moved to Istanbul in 15th century.  A synagogue was constructed in the 18th century and reconstructed in the 19th still caring the name Yanbol synagogue.

Schedule a visit to a synagogue

To visit a synagogue in Istanbul you need to obtain a permission of representative of Jewish Community of Turkey.  Contact security@musevicemaati.com or fax +90 212 244 19 80 for more information.

Must have ID at the time of visit of any synagogue.