Basilica Cistern in Istanbul is a palace-like construction found underground. It was built in 532 and well forgotten until 1545.

Originally organized as an outdoor public space, the Romans referred to the location as the Basilica.  The name came to life when Byzantine Emperor Justinian I rearranged the territory into an underground cistern. It provided water to the Great Palace of Constantinople where the Emperor lived. 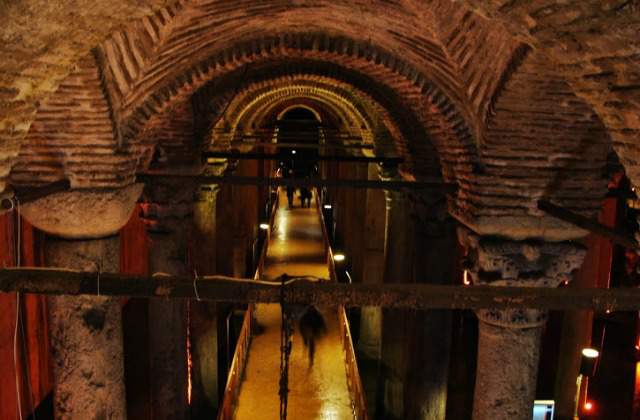 The cistern is located in Istanbul Sultanahmet square.  It is 150 meters away from the Hagia Sophia museum.  Look for the sign and a small door for entrance.  Remember that this is an underground museum, there are no giveaways of the construction outside.

Price: 20 Turkish Liras.  This museum is not included in the Museum Card pass.  Only cash in Turkish Liras is accepted.

Yerebatan Sarayi is another name of the cistern in Istanbul.  From Turkish it means “Sunken Palace”.  After the royal family moved to its new residence in the Palace of Blachernae, the cistern under the city was no longer used and forgotten.  It was waiting to be found again 1500 years later by a curious Frenchman.

In the 300s the first out of seven hills of Constantinople (now Istanbul) had the Basilica built on it.  This was an area with shops, entertainment facilities and other useful spots for citizens.  Historically the area had beautiful gardens there.

In 532 the most destructive riot took place in Constantinople.  It started with a city crowd demanding freedom of prisoners arrested for disturbance.  The riot progressed to massive fires set in the city.  It is known as the Nika riots, from Greek meaning “conquer” - a cheer used to give support to the rioters.  Most of the city was destroyed, including the Basilica, thousands of people were killed.

In the same year 532 the Byzantine Emperor Justinian I decided to rearrange the damaged public space into a cistern.  The royal residence, the Great Palace of Constantinople, needed clean water supply. The Emperor chose the old Basilica to make the underground cistern.  It provided clean water to the palace and the surrounding buildings until the Emperors and Sultans to follow changed residencies 500 year later.

There was no need for the cistern anymore after the relocation of Sultans.  Yerebatan ("Sunken” from Turkish) was the name given to that underground water cistern and is used today. 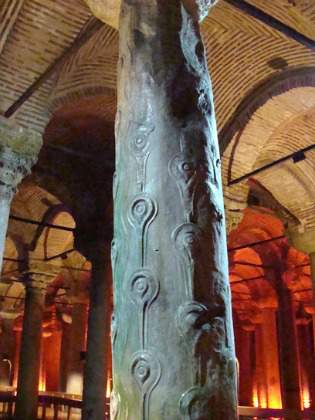 Column at the Basilica Cistern in Istanbul

This is a well planned 140 meters by 70 meters long rectangular space underground.  In feet the measurements are about 460 feet by 230 feet. The space is large enough to line up three average size passenger airplanes.

Take the 52 steps leading down the construction to find this mysterious space.  The stone staircase leads you underground, to the Yerebatan (“sunken” from Turkish”).

Basilica Cistern in Istanbul has 336 marble columns.  They are all performed in classical style of Greek and Roman times.  Most of the columns have cylindrical form. Only a few have square or grooved shape.

The decorations of the columns are unique.  Their top parts are widened. They are decorated either with egg-and-dart motive (the Ionic order) or Mediterranean leave ornament (the Corinthian order).  A few marble columns are straight with no enlargement at the top (the Doric order).

Each column is 9 meters high, spread at a distance of 4.8 meters from each other.  To support the ceiling evenly the huge area is designed into 12 rows.  Each row has 28 marble columns in it.  The ceiling and the columns are attached through the means of arches.

Marbles used in the cistern are of various origin. It is believed that not all the columns were new.  Many blocks came from ruined buildings from different parts of the Empire.  The structure of the columns consists of two parts.  The major part of the column consists of a one-piece marble block.  The smaller part has two pieces of marble blocks.

The walls of the Yerebatan are 4.8 meters thick.  They are covered with heat resistant ceramic bricks.  Same bricks were used to cover the floor of the cistern.  Uneven spaces between the bricks were filled with Khorasan Mortar, a special paste found in the eastern part of Anatolia.

Such thorough construction protects the cistern from underground waters and fire.

The cistern can hold as much as 100,000 tons of water.  Enough to supply water to over 2.5 million people every day.  The Belgrade Forest in Istanbul provided the water for the cistern.  Justinian I built a 200 meter-long aqueduct to make it possible for the water to travel from the Belgrade Forest to the Basilica cistern.  You can enjoy the little fish which swims in the waters today.

French scientist and topographer Petrus Gyllius came to Constantinople in 1544.  The King Francis I of France sent him to research ancient oriental manuscripts.  As Gylius wandered around the area of current Istanbul Sultanahmet, he heard an interesting story.  Local residents claimed they brought water from  the ground floor of their own buildings.  There was a hole in an underground story where the water was found.  Some quick tenants even caught fish there.

As a topographer Gyllius had to research deep into the stories.  The Frenchman went into a courtyard surrounded by wooden walls.  He only had a torch in his hand for tools.  He went down the stone steps and discovered an underground marvel.

To fulfill his mission Gyllius moved around the cistern by rowboat.  He studied the area, took its measurements and identified the columns.  He put his findings in his book De Topographia Constantinopoleos et de illius antiquitatibus.

This is how the Basilica Cistern in Istanbul came back to existence in  1545. 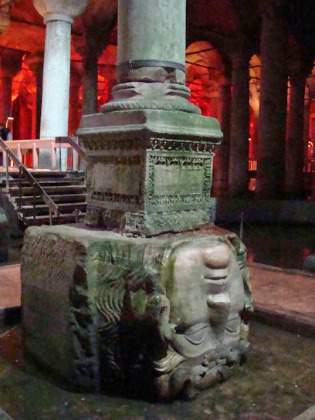 Walk all the way to the far northwest corner of the cistern.  You can see two very different bases of two columns.  These are Medusa heads.  The hideous woman creature with snakes for hair from Greek mythology.  No one knows where and why these symbolic stones came from.  Some historians guess that the stones simply were the right size to serve as base for cistern’s columns.

Medusa head is turned sideways in the cistern.  There are several legends of why it is placed like that.  Some researchers say there is a symbolic meaning of power and protection.  The Medusa protects this important building from the bad eye and bad luck.  Other historians believe that Medusa looked away and turned itself into a stone.

The Basilica Cistern was made available to public as late as in 1987.  Platforms with rails were built for visitors to be able to walk through the cistern.  There were several restorations that took place in the cistern since its foundation.  First one carried out in 1723 during Ottoman times and last one in 1994 in times of Turkish Republic.

Facts and tips about Basilica Cistern 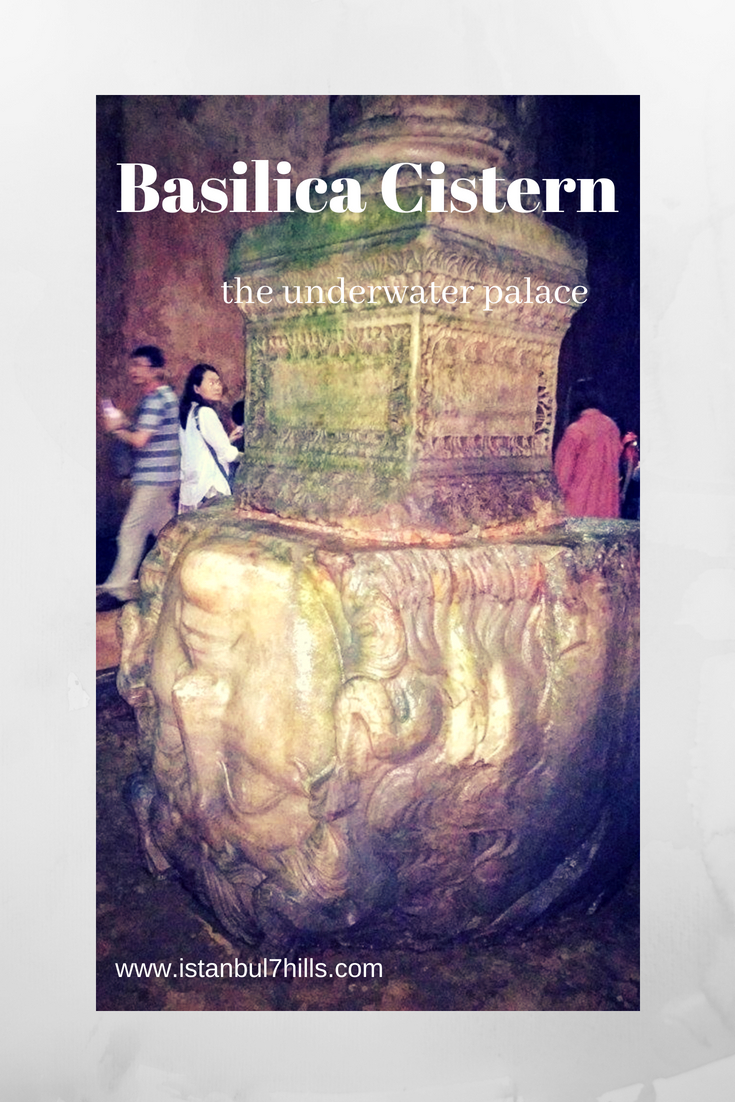