Topkapi Palace in Istanbul is a first Ottoman palace built in 1478 by Sultan Mehmet the Conqueror (Mehmet the II).  The beautiful complex covering the area of 700 thousand m2 (over 7.500.000 square feet) served the Empire for 400 years. 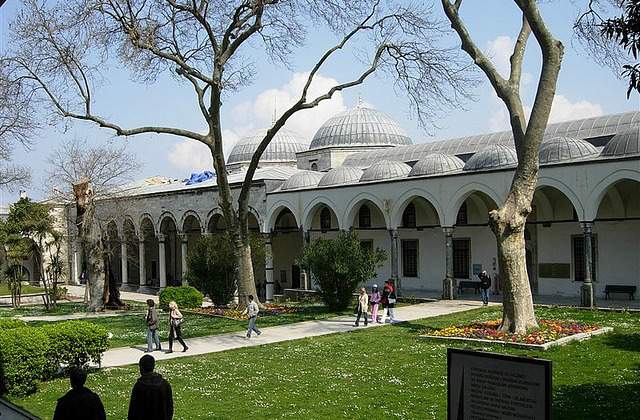 31 Ottoman sultans - from Mehmet II to Sultan Abdulmecid - used the place as an administrative, educational and cultural center of the country.

The Palace consists of 4 courtyards and Harem (women’s quarters).

Only the Topkapi Palace Museum is part of the Museum Pass Istanbul.  Entrance to Hagia Irene Church requires a separate ticket.

After Mehme II conquered Istanbul in 1453 he made the city the main administrative center of the Empire.  He ordered to build the Topkapi Palace in Istanbul in honor of the newly conquered territory.  The Palace's borders coincide with what was the ancient Byzantium.  The history of this area to that date counted to 2140 years.

Construction site for the first residency of Ottomans is selected with much thought.  A hilly area catches the eye.  The hill where the Palace is to be constructed lies between the sea of Marmara and a natural harbor the Golden Horn.  The area has a pretty olive orchard, something that remained from the imperial Byzantine palace, and a small residential district.

It is decided to build the Palace there (current district of Sultanahmet).

Sultan Mehme II chooses to have his private quarters on the highest point of the hill.  Other buildings and administrative areas are located down the hill.

The treasury is used widely to sponsor the vigorous construction.  Only best craftsmen and high quality material are selected for the complex.  This is a grandiose plan for a great new Empire.

"A paradise on Earth" is how travelers describe the Topkapi Palace in Istanbul.  The layout is simple but different from palaces seen in Europe or Asia.  There is no strict plan to the Palace.  Sultans in the years to come add and make changes to the complex' structures.

Topkapi Palace in Istanbul - the museum

After a Republic of Turkey was founded in 1924 the Topkapi Palace became a museum.  This is the first museum Turkey opens as a republic state.

Gardens and squares surround the new Ottoman's Palace.  There are 4 courtyards and a harem (part where women live) in the Palace.

The First courtyard is the largest of the Palace's four courtyards.  It leads the way to the Second courtyard and opens its doors through a Ceremonial Gate, also known as Imperial Gate (Bab-i Humayun in Turkish).  The paths bringing you towards the sea are there since the Byzantine times.

The First courtyard was used as a park.  There is a Fountain of Sultan Ahmed III.  It was built as a stand alone building made in rococo style.  The fountain served as a meeting point for residents during the Ottoman times.

Royal lodge where the sultan observed various ceremonies is the only royal structure in the First courtyard.

Enjoy a great view of Bosphorus Strait from one of the terraces on top of the hill.

Located in the First courtyard of the Topkapi Palace in Istanbul, the Hagia Irene ("Holy Peace" from Greek) church was preserved from the Byzantine times.

It served as cathedral until the Great Church (a precedent of Hagia Sophia) was built.  The Hagia Irene was one of the main churches of Byzantine Empire.  After Ottomans came to rule the Hagia Irene church was used as a warehouse and not a worship place.

Castle-like entrance to the Second courtyard serves as the entrance to the Palace.  Babusselam gates open their doors to this courtyard.  Two large pointed towers are placed on both sides of a fortified wall with small rectangular spaces on the top for shooting.  The gates resemble European castle.

Only the sultan could go through the gate to this courtyard on horseback. Others, locals or foreign officials,  had to go on foot.

This courtyard was mainly used to receive guests.  Peacocks and gazelles are said to be present here to impress visitors.  A strict code of conduct was applied in this courtyard to ensure perfect functioning.

The Third courtyard served as a residential area for the sultan and his family. This is the innermost territory with private rooms and facilities.

Young boys were educated in this courtyard.  A library and a dormitory can be found here.

Treasury department is also on the territory of the Third courtyard.

The Fourth courtyard is a continuation of the Third courtyard and also served as private quarter of the sultan and his family.

There are 5 beautiful independent garden pavilions - kiosks.  They were used as prayer rooms, eating place or a library.

A circumcision room was added later in the history of the Topkapi Palace in Istanbul.  Young princes went through the religious ceremony of circumcision here.