Blue Mosque in Istanbul is a historical mosque dating back to 1600s.  It is still used as a real mosque today hosting hundreds of believers every day.  The construction is among top things to do in Istanbul.

Turkish call the mosque Sultan Ahmet Camii after the Ottoman Sultan Ahmed I who commissioned the construction in 1609. 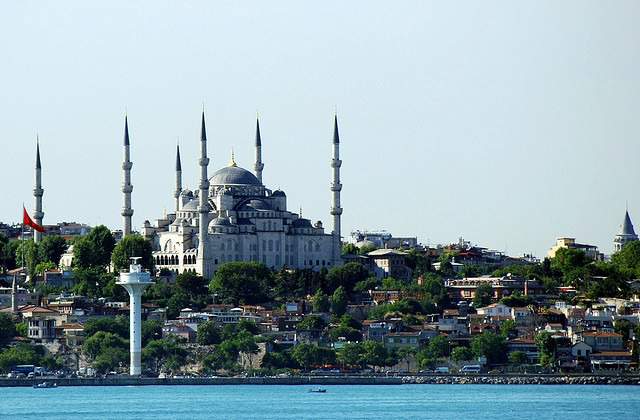 There are 3 entrances to the mosque.  You will get the best view if you enter from the Hippodrom side on the West which is the main entrance.  Before going inside make sure you first appreciate the exterior.  The mosque’s charm starts from the domes.

Price: There is no entrance fee.  Donations are accepted.

Because this is an active mosque, believers are invited to prayers five times a day.  The length of the sermon is about 90 minutes.  Friday mid-day prayer may be longer. Plan your visit accordingly.

Prayer time varies from day to day depending on daylight.

Dress code for entering the Blue Mosque in Istanbul is rather obvious and is no different from a dress code for any other mosque or a place of worship.  Yet let us highlight the basics:

Rules don't say anything about covered feet (wearing socks, for example).  You do have to take off your shoes if you want to step on the carpet.

Decorated in light blue colors the mosque was nicknamed “blue”.  You will not find blue color on the outside of the construction. It is not entirely blue inside either.  Come in and look up at the upper galleries to see where the Blue Mosque in Istanbul got its name from.

When the mosque was originally built in 1616 the interior was decorated with tiles of light blue shades.  During renovations in later years darker blue color was used. The newly used paint truly gave “the blue” impression at that time.

In the latest repairments of 1990s it was decided to use the original light blue ornaments again.  The nickname of the construction remained.  It is still the Blue Mosque (Istanbul).

Construction of the Blue Mosque

The Blue Mosque in Istanbul has been attracting both tourists and worshipers for four centuries now.  It was built in 1616 by Sedefkar Mehmet Aga, a student of a famous Turkish architect Sinan.

Ottoman Sultan Ahmed I decided to build first imperial mosque in Istanbul. During his reign there was no complex that could deserve the imperial status, he thought.  The purpose that the Sultan chased was to have one of a kind facility in the city.  As a result, the mosque became an incomparable architectural creation of Ottoman times.

Mehmet Aga, the designer, studied extensively the mosques built to that date before designing the new masterpiece.  He incorporated ideas used before him in this new Ottoman construction.

The actual construction of the Blue Mosque in Istanbul began in 1609 in winter time.  Design and components of the building were approved by the Sultan himself.  From 1609 to 1616 a major construction of the 17th century unfolded in Sultanahmet district of Istanbul.

The Sultan had such a great interest in the new project it is said he personally took part in the development and realization of this mosque. 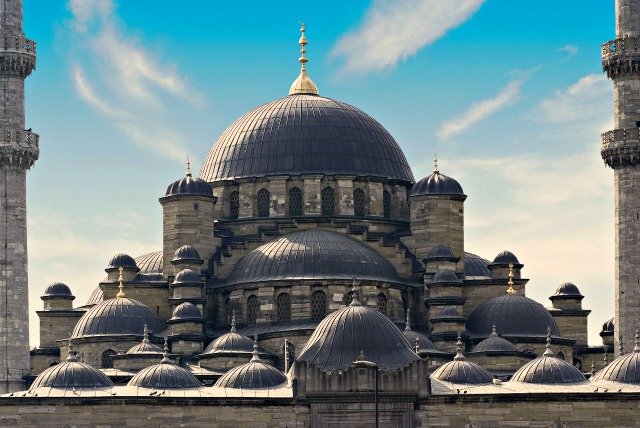 History of the Blue Mosque in Istanbul begins with a legend.  There are several versions of the legend and here is one of them.

Sultan Ahmet I  made a decision to build an imperial mosque in Istanbul that would be extraordinary, worthy of Sultan’s signature under it.  With that in mind Ahmet I asked for the mosque to be built with golden towers.  Towers were the minarets from which imam called the muslim believers to prayer.

At that time only mosque in Mecca (Al-HaramAl-Shareef) had the utmost privilege to have as many as six minarets.  The new project of the Blue Mosque in Istanbul became a point of dispute.  Sultan Ahmet the First chose to sponsor the seventh minaret in Mecca to avoid conflict between brother states.

Despite the fact that Sultan thought through to the smallest detail his new project, there was no good plan for covering the costs of the construction.

Such big projects were usually affordable after successful battles.  The battles would bring necessary resources into Empire's treasury. However, Sultan was not successful in wars.  The Treasury did not thrive during the ruling of Ahmet I.

A major plan for the imperial mosque commenced in 1609 despite the absence of monetary plan.

A theological school (madrasa) and a library, a market with shops and Turkish baths (hamams), a hospital and a kitchen for the community, all were a part of a large magnificent construction.  This was an expensive project, paid solely from the Treasury, raising many disappointments among Sultan’s advisers.

Sultan Ahmed I died in 1617 and was buried in the Blue Mosque in Istanbul.  The mausoleum today is very popular among Istanbul tourist attractions.

The structure was built in a classical Turkish style with added elements from Byzantine Christian architecture.  The graceful Byzantine touch was borrowed from the neighbouring Hagia Sophia.

Grandioze maine dome and its adjacent smaller domes when approached from the front entrance take your breath away.  Designed by combining the best ideas from the Islamic art of the Ottoman times the Blue Mosque's exterior gives a feeling of rising up to heavens.  The illusion is truly an architectural victory over brick and stone.

Besides the impressive in size the main dome there are eight secondary domes which make up upper and lower levels of the construction.  It is them that give the mosque a figurative look from the outside.

Four massive columns grow into arches and support the main dome from the inside.  The columns are so big in size they are often compared to elephant feet.  The size of the main dome gave the mosque its magnificence and an opportunity to place a huge courtyard in the middle of the complex.

The towers were made in classical Islamic architecture style.  They are multi-storied and have cylindrical form pointing up to the sky at the top.  The base of the minarets is square which then smoothly grows into round shape.

The minarets are lead plated (plumbum) and have at least two balconies in each of the them.  Worshipers are invited to prayers from these balconies. An elegant spiral staircase used to bring muezzin (a person appointed to call to prayer) to the top of the minarets.  Today loudspeakers and microphone are used instead.

The interior is famous for its handmade ceramic tiles.  More than fifty different designs were ordered from Iznik, a town in Turkey.  You can see exquisite tiles with fruits, flowers (dozens types of tulips) and cypresses on the upper levels.  Over 20,000 pieces were used to decorate the entire building when the Blue Mosque was built.

The floor is covered with a special segmentally patterned carpet.  It helps those who pray lign up side by side easily during the prayer.  The color of the carpet is usually red.  There is no explanation why this motif color is often chosen.

Take your shoes off before stepping on the carpet.  It is important for those who pray to be clean and keep the praying space clean.

Colorful paintings complete the imperial look inside the Blue Mosque in Istanbul.  Gold, marble and crystal balls were used for ornaments.  A number of artists were invited to compete for offering the best decoration ideas.  Fine artwork and skillful combination of drawings give the mosque a unique touch.  Every pattern used has its meaning.

Mostly prosperity and good luck are depicted in the drawings.  You can see a lot of the infinite pattern incorporated in the paintings which is characteristic of Islamic art.

There are a total of 28 windows in both the main and secondary domes. Beautiful colored glass brought from Venice was used on the windows. This provided a special lightning and atmosphere in the mosque.

Very little of the original stained glass has survived to our days.  Chandeliers however are still present for your admiration. 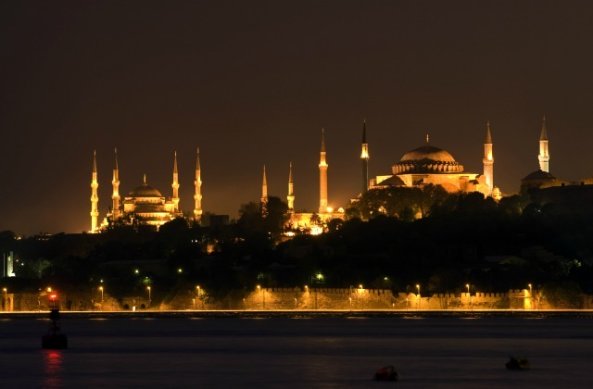 Hagia Sophia and Blue Mosque side by side
© 55hasan | Dreamstime.com

Hagia Sophia (another magnificent monument) and Blue Mosque are often confused by tourists, and these two timeless structures are not the same. Easily recognize the Blue Mosque among others by counting the towers. There are six of them.

You might get your attention carried away by Hagia Sophia.    A graceful outline of both buildings unites these two monuments of Istanbul Sultanahmet district.  When Sultan Ahmed I planned the Mosque he intended it to be more grand than Hagia Sophia.  This is why it took 7 years to build the Blue Mosque in Istanbul, so it stands out and is not confused with Hagia Sophia images.

Facts about the Blue Mosque in Istanbul