The mosque is the largest Ottoman mosque in Istanbul located on a hill.  Sultan Suleyman I commissioned the mosque in 1550.  He and his legal wife Hurrem are buried in separate domed mausoleums in this mosque.

The mosque is recognized as unique architectural masterpiece by UNESCO World Heritage Center. 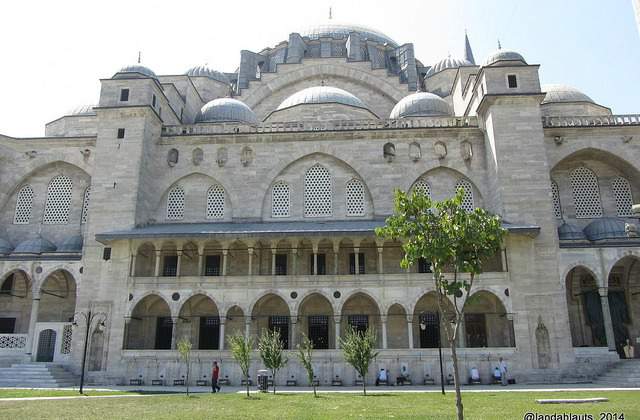 In 1550 Ottoman Sultan Suleyman I, known as “the Magnificent” and “the Lawgiver”, ordered to build an imperial mosque.  The chief Ottoman architect and civil engineer Mimar Sinan was appointed to design the construction.

It took 8 years to complete the large complex.  In 1558 the great religious and cultural structure with its own bathhouse, school, hospital and caravansary (an Ottoman version of a motel) started its existence.

This mosque is referred to as "the finest" of the 42 mosques that today's Istanbul inherited from the past.

In July 1660 a fire started  west of Eminonu in a shop selling straw products.  Because of the strong wind that day large areas of the city suffered much before city help could arrive.  The mosque was among the severely damaged buildings.

In 1766 a large earthquake stroke the Marmara Sea. It took many lives as well as destroyed the works of architecture, including the imperial mosque.

Only in 1956 the mosque was fully restored and gained its present look.

Architecture of the Suleymaniye Mosque

Suleymaniye is an example of both classic Islamic architecture and Byzantine styles.  It resembles the Hagia Sophia but is purely an Ottoman construction.

The complex includes a large skillfully designed courtyard with slender minaret (tower) in each corner of the yard.  Each minaret has 10 galleries, representing Sultan Suleyman, the 10th Ottoman Sultan.

The number of minarets allowed in a mosque depended on the status of the individual who invested in the construction.  Sultans, for example, had the right to have 4 minarets built in their constructions.  Princesses and princes - only 2.  Others - just 1 minaret.

The large domed buildings are supported by half domes.  The height of the main dome is 53 meters (174 feet) with the diameter of 27.5 meters (90 feet).  The yard is surrounded by a columned porch made of marble.

Because the Suleymaniye Mosque is located outside of the tourist district, indecent locals might try to trick the visitors.  Some of the tricks include:

The area is rather safe.  Just use common sense when traveling here.  Here is a funny article about how strangers can make your trip better.