This square is where people meet, ideas are expressed, history is made. 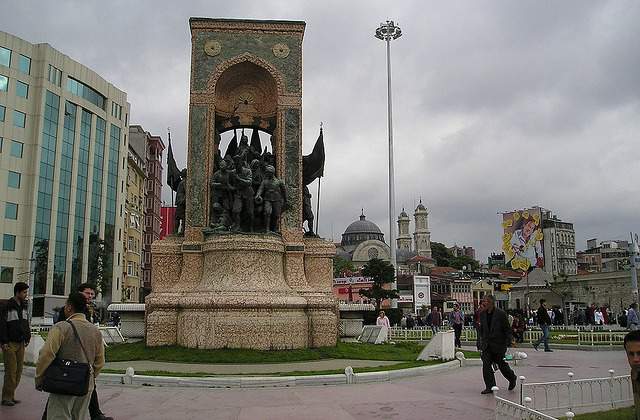 Monument of the Republic

This is where Istanbul waters met in the Ottoman times.  Water from the Northern part of Istanbul was brought by pipes to Taksim and distributed to the rest of the city.  From old Turkish Taksim means "water storage unit".

Monument of the Republic 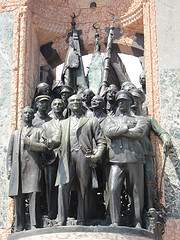 Photo by Justin A. Wilcox

The Monument of the Republic is the landmark of the square.  Look at prideful statue of Ataturk, the founder of Turkish Republic and his two assistants.  Among the people behind them are Russian leaders of October Revolution of 1917.  Kemal Ataturk ordered to have them in the monument to express gratitude to the leader of Soviet Union for providing military aid during the Turkish War of Independence in 1920.

The monument is 11 meters (36 feet) high.  It was built in 1928 to commemorate 5th anniversary of the formation of Turkish Republic.

It took two and a half years to bring Italian sculptor's design into life.  Ataturk is depicted on two sides.  Look for the side where Ataturk and his partners are dressed in modern attire.  This is the direction of Istiklal Avenue, the modern street of Taksim. 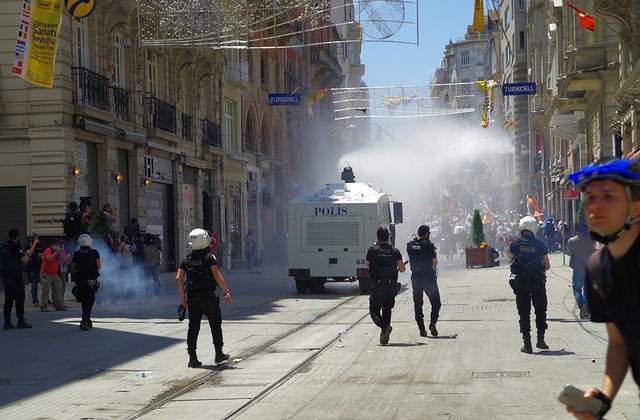 Riot police is now associated with Taksim Square after massive use of force by police against civil protests in May 2013.  Residents of Istanbul protested against demolition of Gezi Park, the only green area in Taksim among concrete buildings and pavements.

Police used excessively tear gas (including internationally prohibited kind)  and water cannons.  Protests lasted for over a month and spread out to all Turkey known as Occupy Taksim movement.  It was estimated that 3.5 million people across Turkey took part in the movement.  As a result of riot police actions 11 people were killed, 8,000 were injured, 3,000 arrests were made.

Taksim has several live cameras.  Here are links to two of them - camera 1, camera 2.  Watch in real time what life in Taksim looks like.

Consider staying in a hotel in the area.  You will be close to events, shopping, restaurants, nightlife and even protests.  Sleep options range from hostels to 5-star hotels.  Select what suits your taste and need.

Enjoy the controversial city of 7 hills!